11 things I learned after living one year abroad 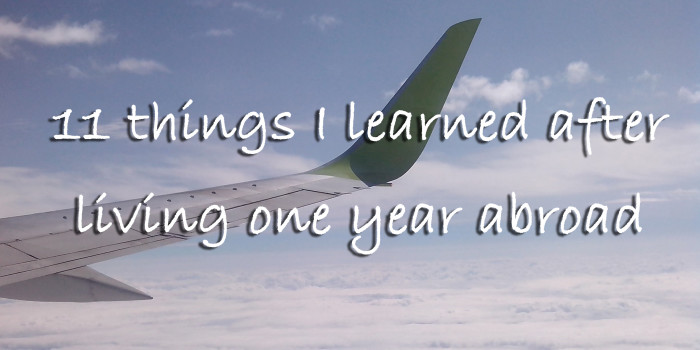 It’s a around 1,5 years ago when I moved out of my shared flat in Germany. 1,5 years! It feels like it was only a couple of months ago. But it also feels like it’s ages ago and I seemed to be a different person that time. I think I did change in the past eighteen months. And that’s good.

There are quite some things I learned while being abroad which I’d like to share with you.

1. You can’t plan everything

Prejudice say that Germans like to plan. And yes, I guess for me that works as well. But one thing I quickly learnt is that some things are out of your control – and that’s okay! You can’t plan everything.

Most people who go abroad (e.g. for Erasmus, an internship, a new job or whatever) won’t know anyone in their new home town. So you’ll meet new people. People who might change you. You’ll get to know other cultures and might get a different view on some things. You’ll make new experiences you might not have expected – good and bad ones.

I never planned to stay six months in Tromsø, in fact I wanted to leave Tromsø at the beginning as fast as possible. I had strong concerns about going there shortly before flying there and in the first weeks I just felt like taking the next flight back to Germany. However, instead of the planned 3,5 months I stayed six months in Tromsø and I really had a hard time leaving it. And I’m looking forward to New Years Eve in Tromsø now :)

Meeting another vegan from almost your home town in Norway? Works! And I have to say that I’m from a very small place in rural Germany where I haven’t met any vegans before!

Meeting a former class mate of someone I got to know in Riga, but who comes from southern Norway? Works!

Meeting someone who does Erasmus in Stuttgart (where I study) who normally studies in Tromsø? Check!

Just some examples which came immediately to my mind, there are even more :) Don’t be scared, especially Europe isn’t as big as it might feel at first. And if you’d like to travel, but you’re a bit scared: Just take the first step! If you have any serious problems or you feel like going home, you can always do that, it’s just a short flight away! It sounds weird to spend your free-time as 22 years-old-girl with people who are already 35? I don’t mind! I can tell you that I met really different people, some not even 18, some more than 10 years or 20 years older than me. And some of them became quite good friends. What matters is that you get long – who cares if there’s an age difference of more than 10 years?

4. Comparisons will make you unhappy

For half of a kilo buckwheat you pay 0,60 € in Latvia, no way you’ll find that in Germany for such a price. Let alone Norway! But therefore you’ll pay three times as much for my hair mousse in Latvia. And generally why are German people so serious? Can’t we be a bit more relaxed like Norwegians?

Advice: When it comes to money, avoid comparing! It’ll just make you crazy: You cross a border and suddenly the item costs three times as much! When it comes to culture: You can’t change all people, but take it with you that people and attitudes towards life can be different. Learn from it. Nothing very fancy, new or surprising, but still true.

Before going abroad it was very important to me with whom I’m living with. And I’d appreciate it, if the rooms we share wouldn’t be a complete mess. Of course I still prefer to live with people I get along with well and a clean kitchen is something nice. However, after living with several different people from different countries abroad (e.g. the messy one and the kitchen police: “There’s a spoon lying there for 3 minutes! Can’t you clean it NOW?”), I can tell you that you can live with almost everyone and you can deal with most stuff. I’m generally much more relaxed about it. Don’t stress yourself. I think many of us limit themselves by thinking to much about their (future) actions. Stop thinking you can’t do it before you even tried. Stop thinking what other people might think, what might be or what has happened and what people might have thought. It’s all in your mind. Some people said this sentence word by word to me – and that’s good. I still have to remind myself in some moments that some things might be just in my mind.

I had one situation (actually I think there were several, but one which is especially stuck in my head) where I went a bit crazy thinking that my behavior in a certain situation was let’s say “strange” and I was worrying that I made a wrong impression. I was worrying much too much about it – it was all in my mind. Other people perceived the situation very different from me. And don’t underestimate that people (and especially those kind of people you want to get along with) are empathic and don’t expect you to be perfect.

8. And I am indeed able to learn a language!

I have been fighting with Spanish in the past years: Starting a course, stopping it, because it became to stressful, starting another one, learning by myself, learning with tandem partners, starting to learn Russian in Latvia, stopping, …

However, I didn’t really came far with all of that. I love languages, especially Spanish and I’d love to be able to speak it, but it didn’t work out so well (yet). Somehow I also got a bit demotivated. I really put effort into learning the language and other people don’t, they just pick up the language in no time without much training.

Buuuuuuut: I am able to learn languages! I noticed (unfortunately a bit late) that I did pick up  Norwegian – just like that, without doing soooooo much for it. Wow! I was just surrounded by the language a lot and learnt quite something.

Okay, some people will say: “Norwegian and German, that’s so similar. No surprise that you picked it up.” Maybe. Though don’t underestimate it. I didn’t understand anything when I arrived in Norway. However, even if it is an easy language to learn as a German person, I think I just needed a language-success story! 9. It’s not money that makes you happy, neither things

I’d say I’m not rich, neither poor in Germany. In Norway things changed a bit: Standing in supermarkets where everything costs on average about three times as much as in Germany isn’t so much fun and you indeed feel kind of poor living there while doing an unpaid internship living in a ~ 6m² room you still paid more rent for than your room in Germany almost three times as big (hey, at least you could reach everything while sitting on the bed and didn’t need to move ;)).

I can still tell you that I’d definitely do it again. I mostly didn’t mind the small room and well, I admit the supermarket was sometimes discouraging, but I gained so much from my stay in Norway. I’d always swap my big, full-equiped room again for the small room where I could just turn around and nothing else. I don’t need much stuff around me to be happy. The most important things are free and take no space: Love, friends, a smile, a beautiful walk in the nature, seeing the sunset, …

10. You can eat everywhere vegan

Maybe you won’t have such a variety as in Germany when it comes to meat-alternatives or for example plant-based milk, but there are so many delicious recipes with simple ingredients which you’ll find everywhere. Fruits and vegetables in Latvia were just great and Norway had delicious vegan cinammon rolls (similar to Korvapuusti). All in all I had no problems with eating vegan in Norway and Latvia – and there are definitely more vegan friendly places than these two countries, so don’t worry about food :) I even met some really nice people though veganism. Look out for Facebook groups for your destination, you might get some advice there :) 11. After being abroad you’ll see the beauty of your own country

Sounds strange, but it’s true. I was never the person who said Germany is ugly, but I still changed my view a bit. Half-timbered houses in my home town? Beautiful and special. German reliability? Something nice as well! These are just two examples of things in Germany which I really appreciate – and never paid much attention to before going abroad.