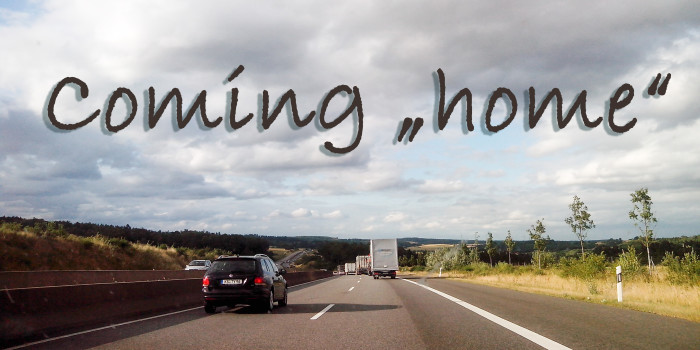 People write about their experiences abroad – I saw that a lot of times. But a lot of people who lived abroad just stop writing when they’re back home. Do they just continue living like before? It feels difficult for me. Probably because I always was the type of person who is not good at letting things (or people) go.

I’m back in Germany for a month. On one side it feels like ages ago when I was in Tromsø. And I don’t dare to say anything about Latvia… have I really been there just 10 months ago? And lived there for 4 months? Having my ups and downs, travelling all over the Baltic countries or just strolling over the central market on a sunny day? Luckily I don’t feel 100 % back in my old routines which is mainly because I just moved into my old room (which I just subrented for a year) a week ago, before that I was travelling, meeting a good friend of mine, being at my parents place. And university hasn’t started yet.

But it was strange when I entered our flat and my room a week ago. When I was at the university campus and in the city center. It seems like time has stopped here. Everything looks (almost) the same, everything smells the same, everythings works the same way. But I don’t feel the same. I don’t feel like fitting in here that perfectly anymore (if I ever fitted in here). And that I actually didn’t want to leave Tromsø (I just have to in order to finish my studies) doesn’t make it better. Life is continuing in Tromsø without me. Even if I get the unlikely opportunity to return there at some point it won’t be the same. It will never be.

Before I left Germany last year I did expect that living a year abroad would change something – would maybe change myself a bit. But I didn’t know that it would change me so much (for good) neither did I expect that it would confuse me so much regarding what I actually want to do in my life and mess up the few plans I had completely. And I didn’t expect it to be so hard to return back to the German city I’m studying. Or coming back home? “Home” is a difficult concept and I’m not always sure where home is.