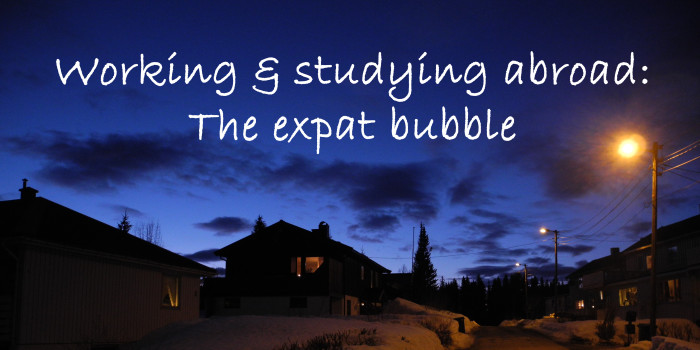 Soon I’ll be in Norway for two month. Where did the time go?

And if I think about that, I feel like panicking a tiny bit. Two month here means that more than half of my time here is over. And I don’t feel like leaving now. Especially not to continue studying in my university city which I actually don’t like. Moreover: What is it then: I actually did learn to understand quite a lot of Norwegian by now, I guess, but I can’t speak. And if I’ll leave now, I’ll just forget everything again. I put too much effort in learning the language for that! And I do want to learn the language. (Although I know that Norwegian might not be the most useful language… sorry, if anyone from Norway is reading this sentence ;))

What I did in the past weeks: I went skiing for the first time in my life! I was quite scared at first, but it turned out to be a lot of fun! So if I’d live here permanently, I’d probably buy ski myself as well :) Moreover I went on helping in the cat house (from the local animal protection organisation here) and I wanted to show you some photos of the lovely cats there! Maybe not the most beautiful photo, but the most wonderful cat: Bethanie ❤

I also met some more nice people here. While living as exchange student in Riga, it felt more like living in a “bubble”. Although I did belong to the few ones who had at least a little bit of contact with Latvians, I was mostly surrounded by other exchange students. Which is perfectly normal, I’d say. Because it is just like that: The locals already “have their life”, means they have their friends, their daily schedule, … while exchange students usually don’t know anyone at the beginning, so they are very open and actually “have to” find friends. Moreover they want to explore a lot, they don’t (need to) take everything so serious, … And I don’t want to say that this bubble is a bad thing. I just want to say that the life I lived in Riga just isn’t the normal life of a Latvian person.

Here in Tromsø it feels different, but I already expected that from the beginning because here I’m working and I don’t have any university courses. I did meet some exchange students or other foreigners here, but I think I’m often surrounded by Norwegians. (This motivates to learn the language by the way.) It’s also caused by becoming active in for example Dyrebeskyttelsen (the mentioned animal protection organisation) because that might not be the most typical thing people who are only here for a certain time do. But to make sure that you don’t get me wrong: I’d lie if I tell you I know a looot of people here and I know them very well. But I do know some nice people and that I don’t know them that well after 6 weeks is normal, I’d say. At least for me ;) Last weekend we had a potluck with the volunteers from Dyrebeskyttelsen. Lots of lovely people together with delicious food :)

If you ask me what kind of “life” I like more: I can’t really answer this question. I did like it to have a lot of different nationalities around me, get to know other cultures and stuff like that. But Tromsø seems more real and honest. And I do get to know cultural habits: The Norwegian ones :)

But one sentence to finish that blog post: I think I’m lucky as well and I don’t take it for granted that I met nice people here ❤

Have you ever lived abroad? What are your experiences?

Blueberry-Cocos-Muffins with a pinch of cardamom

Blueberry-Cocos-Muffins with a pinch of cardamom