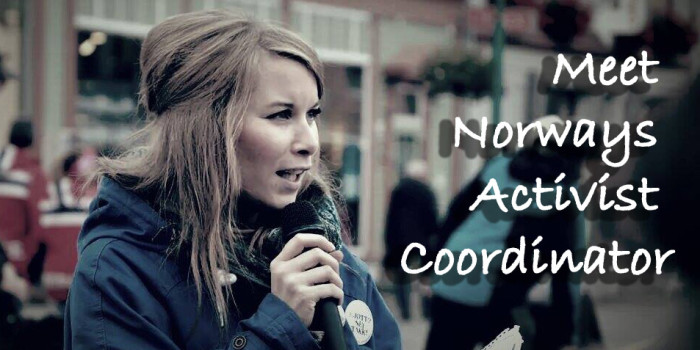 Hi Jeanett! Nice that you decided to take part in the Vegan Voices project! Would you like to introduce yourself a bit at first?

I’m 30 years old and I’m an animal rights activist. I have a Bachelor degree in social work and started on a master degree in peace studies in Tromsø, but since I got my dream job as an activist coordinator in NOAH- for animal rights (Norwegian: NOAH – for dyrs rettigheter), will take a break from my studies.
I would also like to add that I’m an optimist who believes that someday all humans will recognize that animal’s ability to suffer is no different from ours, and that the exploitation and killing of animals will no longer be socially acceptable. Just the last couples of years gives great reason to be an optimist for the animals. More and more people are waking up to grasp the massive injustice and violations being committed to billions of sentient beings every year. This would not be possible if it wasn’t for all the wonderful human beings out there who choose to raise their voices for the speechless. Thanks to all the committed animal rights activists in the world, we are now seeing some serious changes. Also veganism is now becoming more and more mainstream. It is so wonderful to witness these changes.

You’re vegan since 2010. What was your reason to go vegan and how did you come across veganism?

I went vegan for the animals. I believe that every animal, as the human animal, has the right not be exploited, abused and killed. When it dawned on me how much misery and suffering we inflict on defenseless animals, no matter how humanely and organic we claim it to be, I just couldn’t be part of it anymore – and progressed from vegetarian to vegan. I haven’t looked back since. I’ve learned about veganism through literature, social media and wonderful people I have met along the way.

You recently started working as activist coordinator for NOAH. For the people outside of Norway, can you shortly explain what NOAH is and what they are doing?

NOAH – for animal rights (NOAH – for dyrs rettigheter) is an organization for people which wants a world without animal exploitation and who work tirelessly to ensure that such a world is achieved as quickly as possible. NOAH started in 1989 by a group of activists with experience in national and international environmental and animal rights work. Today, NOAH has over 7,000 members and thousands of active supporters who promotes NOAHs message of respect for animal life. In most cities of Norway, there are local activists and NOAH-helpers. NOAH strives to influence at all levels, and across all social groups. They meet politicians and influence legislative changes. They have eye-catching campaigns to draw media attention to animal rights and share information to over one hundred thousand people each year. They also hold conferences and lectures in schools, write articles and feature articles, demonstrate, campaigne – and rescue individual animals. NOAH also organizes the annual NOAH torchlight hike against fur, which is Europe’s largest event for fur animals!

I love it! I’ve dreamt about working for NOAH for many years, and I still can’t believe that I now have the privilege to dedicate all my time to work for animal rights. It’s so amazing to be surrounded by dedicated animal friends on my workplace, we even have two cute dogs there. I feel like the luckiest person on the planet!

What did you do to get this job? Did you have any special qualifications? I guess there are quite some people who’d like to have that kind of job you have :)

I have been active in the organization since 2009 and initiated several events. My motivation for NOAH and animals have, in these years, always been great and I think this might have contributed to me getting the job. I did apply and went through interviews as normal, but if I have specific qualifications, I’m not aware of them. My advice for anyone who wants to work for an animal rights organization is to be as active as possible and learn as much as you can about the issue. I found out early that out of all the animal rights organizations in Norway, NOAH was the best and most effective. And more importantly, they work for all animals.

How can we imagine your typical working day?

As an activist coordinator in NOAH I will do lots of exciting things, my main job will be to coordinate NOAH activities among volunteers across the country. I will also be organizing events, keeping order of all the NOAH stands and event material and promote NOAH’s work and activities through social media etc., to name a few.

Do you have any projects you’re planning in the near future? If so, what are they about?

The main focus now is organizing the annual NOAH torchlight hike against fur. Last year NOAHs torchlight was held in 16 different cities and towns in the country, in the capital alone there were between three to four thousand people who showed their support for fur animals. Hence, it’s a big event and a lot of organizing that needs to be done, and we have already started.

That sounds wonderful. I wish you good luck for the organization of the torchlight hike and for all actions which will follow. Thank you very much for your time :)