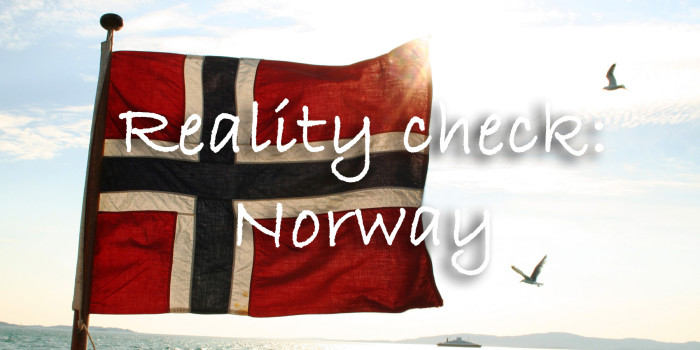 What do you think about Norway? Maybe you’re thinking about the typical stereotypes now: cold weather, cold people, … But is it really true? While living in Norway for the past three month, I formed an opinion about the truth of some of these stereotypes :)

1. 400 km above the arctic circle? That must be sooooo cold there!

That’s for sure one of typical sentences I heard when I told someone that I’ll go to Northern Norway for an internship. And well… I actually can understand that as my thoughts were similar before I started to deal with Norway and especially Northern Norway.

The reality? No, actually it’s rarely colder than -10 degrees in Tromsø. And even minus ten degrees is unusual. I arrived in the beginning of March and experienced at the most – 1 or – 2 degrees.

Therefore it’s at the moment (June) only 15 degrees on the warmest days. And the last heap of snow in the city just melted a few days ago. Well yes, that might sound a bit strange. At least for a German person like me ;) By the way generally April can be described as the month with the most snow.

Oh, and it might be totally different in Oslo as there are 2000 kilometres inbetween. Norway is just such a large country! Snow… a lot of snow! (Photo taken in March)

Well, that’s no secret, is it? But before I went to Norway for the first time, I didn’t know that it would be so, so expensive. And we don’t talk about a price level like for example in Finland which Germans consider as expensive country. You can easily pay 4 – 5 € for a mango, a cucumber costs more than 2 €, a short ride with the bus makes almost 5 €, … So be prepared to get price shock at first ;)

But I should also mention that you can quickly earn here three times as much as in Germany.

Conclusion: Yes, Norway is really expensive. But if you’re lucky and have a job here, you can also earn quite some money. A cucumber for more than 2 €. No rarity.

3. All Norwegians are fluent in English.

Okay, I admit that it rarely happens that you meet someone who is bad at English or speaks no English at all. At least that was my experience in the last three month. And therefore I’m brave enough to organise vegan information stands in the city centre… even without speaking the national language. And it works! Mostly people don’t mind me speaking in English to them :)

But there are quite some Norwegians who will tell you “Oh, my English is really bad, I’m sorry!”. Well… some speak iiiiincredibly good English and some speak “just” good English. Moreover you’ll meet every now and then a person who can even speak German. 4. Norwegians are cold and introverted.

That’s for sure another popular stereotype. Do I agree with that?

At first I’d like to say that it always depends on the individual persons and the paragraph is based on the people I met. And I met people I’d definitely describe as introverted. But there are also people who are everything but introverted. However, in general I’d agree that Norwegians are a little bit more shy than Germans. But they’re more open and more friendly than I expected. And I wouldn’t describe them as cold, not at all. As soon as you get to know them a little bit better, they’re so likeable people!!

Conclusion: Okay, I think you can’t compare Norwegians with for example Italian people and it’s hard to generalize, but I’d describe Norwegians a bit shy at the beginning (though not as shy as the stereotype pretends), but they’re definitely not cold! Three very likeable Norwegian girls, who are not cold at all :)

5. Norwegians enjoy walking and spend a lot of time outside.

Well, that’s what I expected when I arrived here. But I got asked pretty soon when I’ll buy my bus ticket, so that I can go to work by bus. Otherwise I would have to walk around 30 minutes by foot! (And that was actually in winter time, now it’s only 15 – 20 minutes… so maybe you can imagine now how I moved here in winter =D) So there wasn’t a question for me, for sure I’d walk and save the bus ticket. I don’t like going by bus anyway, I save money and I don’t have to rely on timetables. And it’s not far away.

But most Norwegians seem to think differently about that and they do consider it as long way. Going for a hike, skiing and things like that: yes! But walking in town seems too time-consuming for most of them. At least it seems like that when you see the amount of people at the bus stop ;)

Conclusion: Yes, I do think that Norwegians enjoy walking. But in the nature. For the daily way to work the car or the bus is prefered. Have you ever been to Norway and made similar experiences in Norway? Or completely different ones? And what about a second part, I think I could think of some more stereotypes & experiences of mine :)