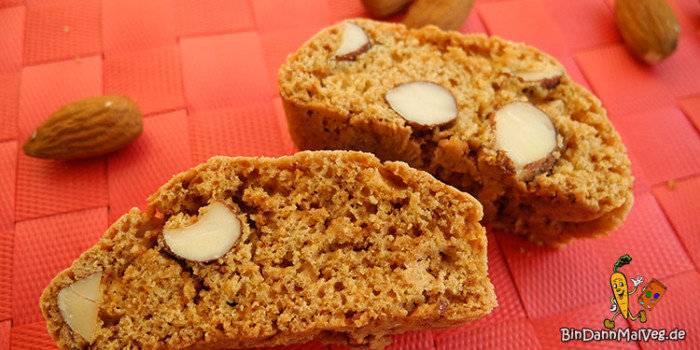 I like the Italian kitchen! But I guess I’m not the only one =D But really: There are so many delicious italian recipes and moreover a lot of them are vegan or very easy to make in a vegan way. Also this one: Cantuccini! For sure you have already heard of these small biscuits and probably you also tasted them already. This summer I was in Italy and I saw them in every supermarket. Unfortunately always with egg, although there’s absolutely no need for that. But I was happy to eat the Cantuccini a few month later… although it wasn’t in Italy then :)

To increase your general knowledge: Cantuccini are small almond biscuits from the province of Prato (near Florence) in Italy. They are often offered with wine, tea and coffee. The secret of making them is to bake them twice. Once as rolls and later onwards cutted into biscuits.

I hope feel like baking these delicious almond biscuits now :)

First put the flour, sugar, baking powder and vanilla sugar into a bowl. After that heat the vegan margarine, so it becomes liquid. You can do it by putting it shortly into the microwave or just shortly on your cooker. Add the liquid margarine and the plantbased milk to the bowhl and mix everything.

Cut the almonds in the middle, so they’re not too big. To give the Cantuccini a better flavour roast them shortly without fat on a pan. Let them cool down shortly, then you can add them to the dough as well. Mix everything and if you like, you can also add a little bit bitter almond aroma or Amaretto.

The next step is to divide the dough in ca. 5 parts. Form long rolls which you put on your baking tray. Bake these rolls for about 10 to 15 minutes using 180°C. But be careful: The dough will stretch, so leave a little space inbetween.

Let them cool down a little before you cut them into “the typical Cantuccini-shape”. They should be around 1 cm thick. Then put them on a baking tray again and put them again for 5 to 10 minutes back in the oven until they are golden brown. Have a look every now and then, they easily get too hard! And also keep in mind that they’re softer, when they just came out of the oven. They will get a little harder later.

You can enjoy Cantuccini best with tea or coffee :)